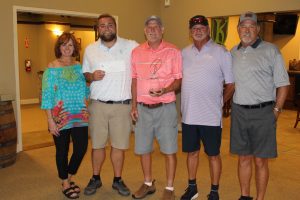 The 32nd Annual OBAR Charity Golf Tournament was held at Kilmarlic Golf Club on June 3rd.  While there were a few sprinkles, the day turned out to be perfect for golfers.

Play began with a shotgun start at 12:30P with 25 teams on the course.  International Long Drive Team Champion Jacob "Jesus of Golf" Golliday sat on the 18th hole, and for a donation, offered to drive the ball for players.

Over $12,000 was raised for the event.  Proceeds benefit OBAR's Disaster Relief fund held through the Outer Banks Community Foundation.  Unfortunately, we did not have a hole in one to claim the free car from OBX Chevy.

Special thanks to the following sponsors:

Hole in One Sponsor: OBX Chevy